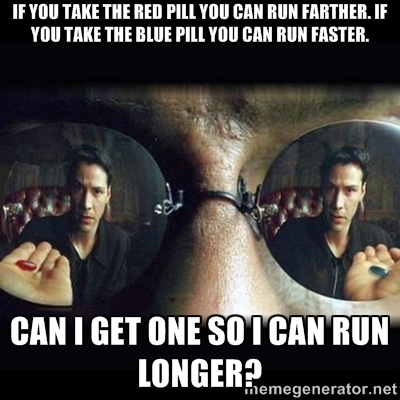 I admit that I’m prone to obsessions.

There’s the time I discovered that my garden could grow beautiful radicchio and every salad at every meal and potluck had prominent red and white chunks throughout.

To be honest, the foot obsession likely goes back to my teens in El Paso when I took my first karate classes. It fully blossomed during the ballet years. Ballet was another obsession of my youth: I took a few classes when I was 19 and 7 years later was dancing in a ballet company.

After my dance years the feet thing went into a long latent period only to reawaken early in 2014 when the black toenails reappeared after running. (See the previous blog “Running again“.) In addition I was puzzled why a man of my “tender” years should be experiencing joint and back pain when Rarámuri octogenarians were capably running 50 mile races in the mountain wilds of northern Mexico. Surely I was missing something. Something important.

I tried new shoes, a full size larger, which gave me some relief; that is, until I started improving my running form, shifting from a heel strike to a mid-foot landing. Then the black toes were back; the new running mechanics were causing forward pressure into the shoe box of the new, even larger shoe.

And the joint and back pain was still a problem.

OK. Time for something drastic.

After a lot of reading both online and offline I decided to ditch the running shoes altogether and go as close to barefoot as I could. If the Rarámuri could do 50 and 100 mile stretches in sandals made from old tires, maybe there was something to consider.

I shopped the online stores and settled on Xeroshoes – about as minimal as you can get without making the things yourself out of old tires or doormats. I chose the 6mm soles over the 4mm, opting for a bit more protection from Earth’s sharp and pointy irregularities. 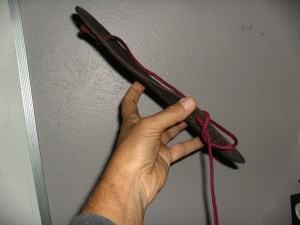 It began with a couple of days trying lacing patterns.

This is what I found works best for me. 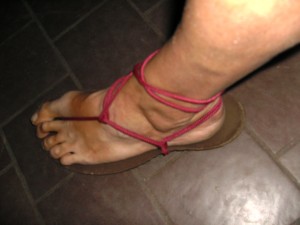 I started wearing them around the house. It was like being barefoot with just a bit of insulation on the bottom of the foot. Then I took a couple of short walks in them.

While I am not one to totally disregard cautions I do believe in testing to see if the rules apply in a specific situation. And so…. we took a two mile run/walk combo. Perhaps the recent years of living in Birkenstocks has preconditioned me somewhat. I felt some muscle soreness but no “bad” pain.

Soon, I was testing out 4 and 5 mile runs. To be honest, the running was maybe 1/2 to 3/4 of the distance as this new way of using my feet and legs was quite tiring. Still, no “bad” pain.

There are compromises that I have to make in this radical transition – I can’t run as fast nor as far, certainly not without sacrificing form. As I said to Badger yesterday during the walking portion of a 5 mile jaunt,

“I’d rather walk with good form than run with bad form.”

And as one running coach said, if you are comfortable making changes in your form, then you aren’t doing it right. Change is unfamiliar and uncomfortable. You just have to live and practice with it until it becomes “normal”.

I may need to get a new pair of more traditional shoes to wean me through this transition when the foot muscles have reached the limit of fatigue.