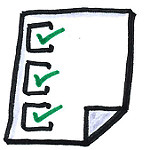 My personal approach to Getting S*** Done is simple, even minimal. It requires very little planning, prevents over-thinking, and is driven by eliminating rather than adding. I follow the lead of Charlie Munger, the right-hand man of famed investor Warren Buffet. Munger is a proponent of ‘inversion’ – a strategy that looks at problems in reverse, focusing on minimizing the negatives instead of maximizing the positives.

It works because avoiding stupidity is easier than seeking brilliance.

“It is remarkable how much long-term advantage people like us have gotten by trying to be consistently not stupid, instead of trying to be very intelligent.” – Charlie Munger

Maybe you have noticed that some problems are easier to solve if you look at them backwards. Kind of like, “We already know where Waldo is. Now, how did he get there? How can we avoid making mistakes as we try to get where Waldo is?”

For me this approach is vastly better than most traditional “to do list” and “goal setting” strategies because it starts with removing what does not matter.

The first thing I remove is anything on my SIDD list (S*** I Don’t Do).

SIDD is my NOT TO DO list. It contains all the things that are too costly (money/emotions/energy), that are better done by someone else who is smarter or more competent, and any of a long list of Things That Had Best Been Left Undone, AKA TTHBBLU (pronounced TheBlu). Some things simply don’t matter, so I won’t do them even if everyone else thinks they are – or should be – important to me. My SuperPower of Not Caring About Things That Don’t Matter gets stronger in me every day!

Some SIDDs actually do need to be done, just not by me.

I don’t try to do final proofs of my writing; The Muse does that. We call it “finding the nits and lice.” For me, “looks and sounds good” is enough, except I know it isn’t. For The Muse, it’s an ongoing debate on whether to use an Oxford Comma; should it be a comma or a semicolon; does that sentence fragment need to be corrected; etc. More often than not when she starts to say to me, “Do you prefer that I…,” a simple look from me says, “SuperPower: Don’t care. I trust you.”

I used to do my own taxes. Now, no. My CPA is worth every high dollar I pay him. He takes classes to be smarter than me in that. Taxes are a SIDD.

I used to work on my car. That’s not something that makes me happy to do, so now it’s a SIDD. I have really good mechanics who are not cheap and are worth everything I pay them. SIDD list.

If something is on TheBlu List, however, it doesn’t actually buy me much; therefore, no one does it.

Here’s an example of something that didn’t need doing: a financial advisor I once worked with took great pride in the exquisitely detailed analysis he provided for each client’s annual review. It had extensive graphs and charts which took exhausting work to produce. I encouraged him to talk with his clients about how they liked them, and he quickly discovered that NO ONE had any interest in that part of his work. None at all. It went into TheBlu.

Knowing the SIDD and TheBlu frees me up to focus on what really matters. What matters each day goes onto two very short lists that are the only things I use to run my day anymore. The two lists are CORE and FTA.

CORE is the Legacy Grade Work that should constitute the heart of my work day: big, bold actions that change the game, create legacies, build empires, and have the potential to OUTLIVE me. The CORE are the first things I want to focus on every work day before any meetings, before picking up the phone, before reading reports or email. Each work day I want to dedicate at least 3 hours to a maximum of 3 tasks.

I also have learned that my Prime Work Times are 7 AM to 2  PM. This is when my energy seems to be at its best. So, in order to plant a flag on my day, I like to do my CORE between the hours of 7 and 11 AM.

FTA stands for Feed The Animals. I got the idea from a guy whose chicken coop was ravaged by a bear. The survivors were so traumatized that they never laid another egg. Still, he had to feed the freeloaders, even if they were not producing. He never said what ultimately became of them, but we can probably guess. One Sunday evening he was headed upstairs to check the status of an online offering he had going, and his wife asked why he had to do it just then. He said, “It’s kind of like feeding the animals.” She understood immediately. The point is that there is stuff that just needs doing even if it’s not the CORE, or Legacy Grade, work. It’s not complicated or “game changing,” but if you don’t do it the animals die. For me this includes most meetings, most phone calls, checking and handling emails, creating and reading reports, etc. These are the sometimes tedious yet necessary forms of work.

So, there it is. Once I have eliminated the SIDD and TheBlu, all that is left is CORE and FTA.

The key is that I never end the day until every CORE and FTA for that day is checked off. Period. I don’t want to go down the slippery slope of repetitive incompletion, so I just don’t get onto the slope at all.  I am VERY CAREFUL about what goes on my daily list because it all has to be done.

The secret to 100% execution isn’t working crazy hours. It’s knowing and eliminating your SIDD and TheBlu, then putting your energy, with focus, into the CORE while still Feeding The Animals.

One last thing. I have learned that for me to focus intensely on these very short lists requires one more trick. That trick is using the Pomodoro method. You will find more about that here.

(More on the Charlie Munger and inversion principles here and here.)