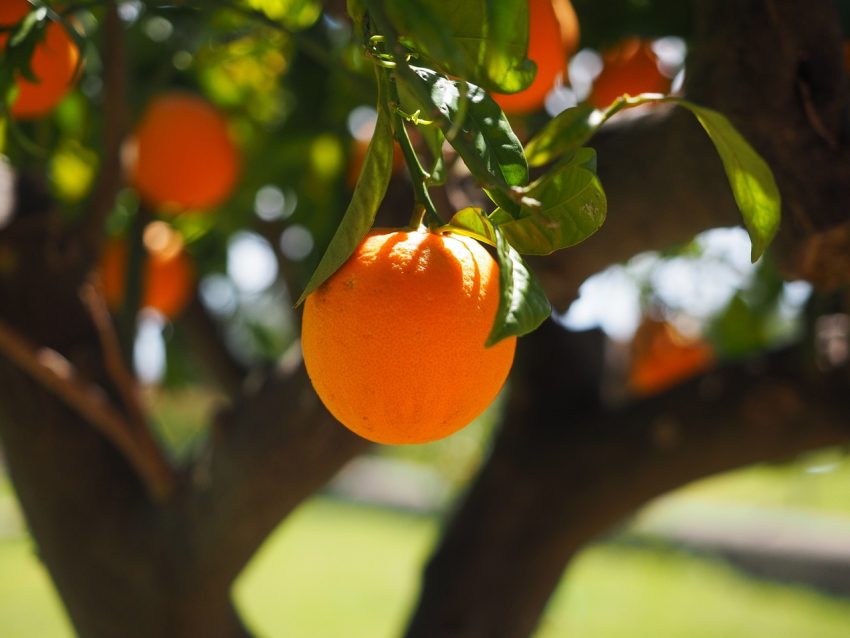 I stuck my head in the door and introduced myself to Phil.

The trail to his door had passed through a variety of fallow fields.

The journey had started with Robert. Robert was an investment adviser who was responsible for recruiting at a local broker dealer. He found out that I did sales training and that I was actually pretty entertaining in front of a crowd, so he invited me to talk at their quarterly sales meeting. They couldn’t pay me, but there would be a collection of my target prospects in the room. Surely they would want to do business with me.

Since it was local gig – no traveling and home for dinner – I agreed.

I was pretty good, I think, and I did get a few bites on my call to action. No meetings and no sales, though.

Again, no payment, but no travel. And I would be home in time for dinner. (I do like dinner.)

Better results than last time: at least one person wanted to see me afterward. His name was Rossi. I went to visit him in his office on the other side of DFW, and it was pretty clear from the first five minutes that he was worse than broke. This was in the early days of caller ID, and there was something about the way he bounced his calls that told me they were looking for money…money he clearly did not have. So – for sure – I was not going to get any.

Knowing a dead horse when I see one, I quickly got out of there.

On the way out of the building (a business incubator environment), I introduced myself to Phil. He looked like he might be in charge of something. He was. He ran the entire incubator.

We got to talking, and I told him why I was there and what I did, and he said essentially the same thing that Robert and Ross had said to rope me into the broker dealer gigs. Same pitch, same rules, same zero comp for the gig. But there was still no travel, and I could be home for dinner…

Are you seeing the pattern?

There is an important piece to the pattern that I have not shared with you, and I’ll get to that in just a moment.

First, let me tell you what happened at the incubator.

I came into the meeting room about a month later, and it was pretty packed with newbie entrepreneurs. I didn’t talk to them about selling or about my programs. I just taught them how to work their network and take care of the people they met. From that presentation, I closed tens of thousands of dollars in training and coaching business. People were referring me to business associates not just in other states but two and three times zones away. The good news was that I did most of my work via phone, so I was typically home for dinner.

The difference was that this was NOT fallow land; it was producing, and it kept on producing for many years.

In some cases it took several years, but practically everyone who was in that funnel did some form of business with me. Some of it is paying me to this day.

What I did was to keep watering my REFERRAL TREE – the entire tree – not just the closest branches. People lose sight of the value of relationships that may be generations removed from their current piece of business, so they stop taking care of them. That’s just foolishness. You don’t do that with a fruit tree. Can you imagine spending all your time taking care of just one branch of a peach tree? No. You take care of the entire tree.

The scenario I described above took me FIVE generations deep before I found any money. Then money just flowed. Surprisingly, some of it started to flow from some of the “old wood”, i.e., Robert and Ross.

Now, here’s something for you to do to bring this to life in your business. Draw it out ON PAPER just like this… 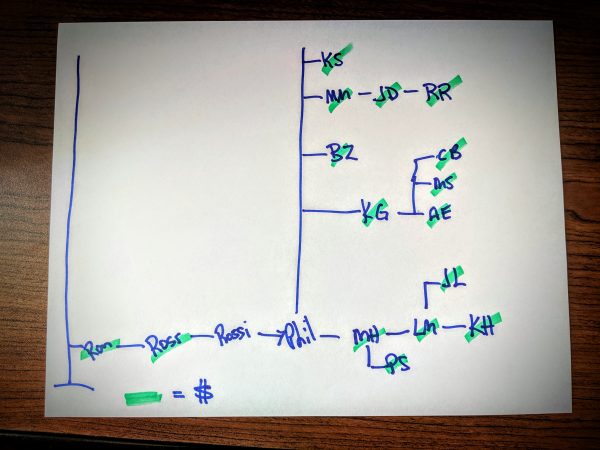 Compare that to this drawing, which is how most people grow their business… 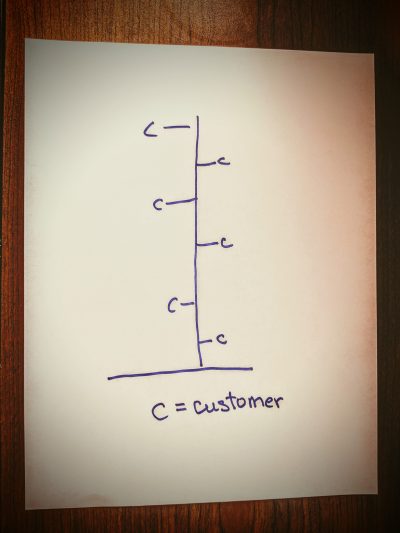 When I saw it on paper, drawn by hand, the light went on.

Now get some paper, pens, and highlighters and do your drawing. Do it now. Keep adding branches.

And take care of the entire tree.