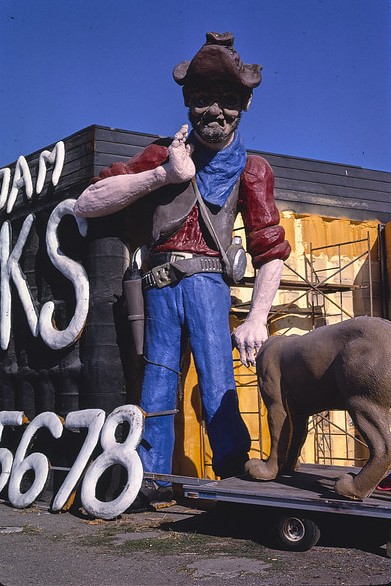 I tried not to be noticed as I crept into class.

It had been a long drive, in heavy traffic after a long day, and I was late. I wanted just to slip quietly into the room, but Herb, the sales trainer that night, noticed me and announced, “Hey, it’s Mike Stammer – the cold call king of Tarrant County!”

I have to admit that I kind of puffed up.

“Yea! That’s me!” I thought. I had been out prospecting most of the day and despite my exhaustion I knew that I was a good cold call prospector.

I’m a bit slow sometimes, so it was quite a while before I realized Herb’s real message was, “Here’s a guy who is too dumb to figure out how to build his business without constant cold calling.”

Yep. Herb was calling me dumb, and I was too thick even to know it.

Old habits can be hard to break. The job I had at the time required constant cold calling. I had started my sales career with that company. It was all I knew, and it was all I could see as the way to go forward. It made me a pretty darned good prospector, but I was essentially starting over every single day. Yes, I had some good prospecting habits, but too much of pretty much anything is not really good.

A year or two later I had left that company and was now in the same training company where I had met Herb.  Now I was a trainer and not just responsible for new accounts. But we had a rule: If you want to train, sell some training. It was a kind of “eat what you kill” policy. I had been there a few months when one of the partners took me aside for “the talk.”

He thought I had a prospecting problem.

“Mike,” he said, “I want you out of the cold call business in six months. Find a better way!”

He was right. Constant cold marketing flew in the face of what we were selling as one of the results of our training: a solid selling system that generates high value referral clients. I was just a bit stuck on what a better way might be for me. Cold marketing seemed so normal.

So I found a better way.

I started teaching by example.

I took every non-cold prospecting tool we were teaching and put them at the top of my tool kit.

It wasn’t easy. While I never have had a hard time breaking the ice when meeting people – I WAS a cold call king, remember – this new approach was really different. Fortunately my older brother the engineer didn’t get all the process and system smarts in the family. I saw that I needed systems and processes that would help me.

I started with newsletters.

As far back as 1995 I had done newsletters for my tribe. So I started by gathering a current list of everything I knew that was going on in the area that involved networking possibilities. People could get it via fax-on-demand. (Yea. I’m old.) That evolved into an online calendar anyone could access. This was long before Meetup and Eventbrite joined the game. People started coming to me because I was the one who knew where stuff was happening.

The tour guide meets everyone, and they want to talk to you.

Be a source of continued value, and people will seek you out.

Then there were cards and notes.

From my earliest days, I had developed a habit of handwriting thank you notes after every meeting. Eventually my contact circle became so large that I added an online system to make it faster and keep me on track. (You can see that here.) The newsletters – even this blog – are great for providing value, but they are still mass media. What the personal notes and cards provided was something that said,”I know you as a real person, a special individual, and you are important to me.” It is a habit that I strive to keep active every day of my life to this day.

These are not prospecting calls. They are personal touches just to find out how someone is doing. They may take a bit of time, but if you want Top Of Mind Awareness (TOMA) with your network, the personal touches (phone, cards, notes) will take you right to the top. Emails and text, not so much. Same with Facebook and messenger services. While they are better than silence, they pale in comparison to the personal touches.

And there is a simple reason.

It is because it is about relationships.

The backbone of relationship marketing is very simple and very old. Emerson called it The Law of Compensation.

I can still cold call, and I am still quite good at it. But it’s just for practice now. It is so much better to reap than to always be hunting.