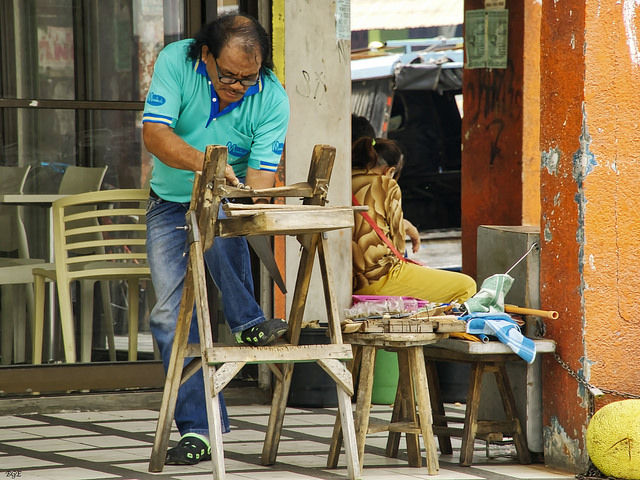 Do you want selling to be easy?

But in every career I’ve had, people just keep finding ways to get in their own way. It’s stunning in it’s frequency.

Then there is almost always a small sub-set of people for whom things seemed to work very naturally and almost effortlessly.

The first group of people are seeking a magic bullet, the miracle shortcut. The national VP of Sales of a company I worked with described them as “always looking for some magic fix, some short-cut that is going to turn them into super producers.”

I saw in it dance. You’d hear a ballerina wanna-be complain that if  the choreographer would “just give me the role I’ll show him what I can do!” Of course she had it backwards.

It’s the same in sales. You want a promotion? You want to make more money? Then sell something.

I’ll let you in on a little secret about the Super Stars.

Rarely, and I do mean rarely, the gods put the perfect combination of talent, training, timing, and temperament into one individual. That person seems like a kind of miracle. But those people are so rare that they are never the foundation of a company or a team.

The vast majority of the top performers are people who have just taken the fundamentals of their trade, craft, or profession and worked them with consistency. They practice them over and over and over until that is just the way that those individuals are.

The truth is that the individuals who seem to be charmed are rarely people of transcendent talent.

I once hired a salesman who gave the distinct impression of being the inspiration for the Elmer Fudd cartoon character.  He was not what you would call a reservoir of natural talent. But his habits, his practices, his discipline, were such that he quickly became the top salesman in our international organization selling financial services.

In my current business I get to see many people who are brilliant in the way that they present and speak and lead. But I have known many of them when they were totally new, just starting out. No one knew who they were. Sure, they had grit and fire, but they were not that much of a standout.

Here is what they all have in common.

Are they geniuses? Who cares?

They are people who have chosen to follow the path of simple repetition and through discipline they became the best of the best.

Back in the 1960’s a little known rock and roll group left Liverpool to play in German bars. When they came back they were The Beatles.

The thing that really sets the high performers apart is their JOURNEYMAN approach.

When I made cold calls for a living I understood that if I walked into 50 to 70 businesses a week I would earn between 40 thousand and 50 thousand dollars a year. It was a lot of money at the time. I learned that it didn’t work if I just walked into 50 businesses on Fridays.

It was the HABIT, the daily operating system, of 10 to 12 walk ins on average – every day.

What are the numbers are for your business? Just make 100 attempts. Track your numbers. You will then have a baseline to build on. And I’ll make you a guarantee:

An average person making 100 attempts is going to beat a very good person who makes 10 attempts. Every time.

That’s just the way it works.

So, there it is. That is what it would be like if it was easy.

Pick a few things to do each day.

Do them a lot.

For a long time.

And you will get REALLY good with them.

Michael Stammer is a Sales | Life | Performance coach available for individual and group coaching and speaking to organizations.
For more visit www.coachmichael.com

3 thoughts on “What if Selling Was… Easy?”