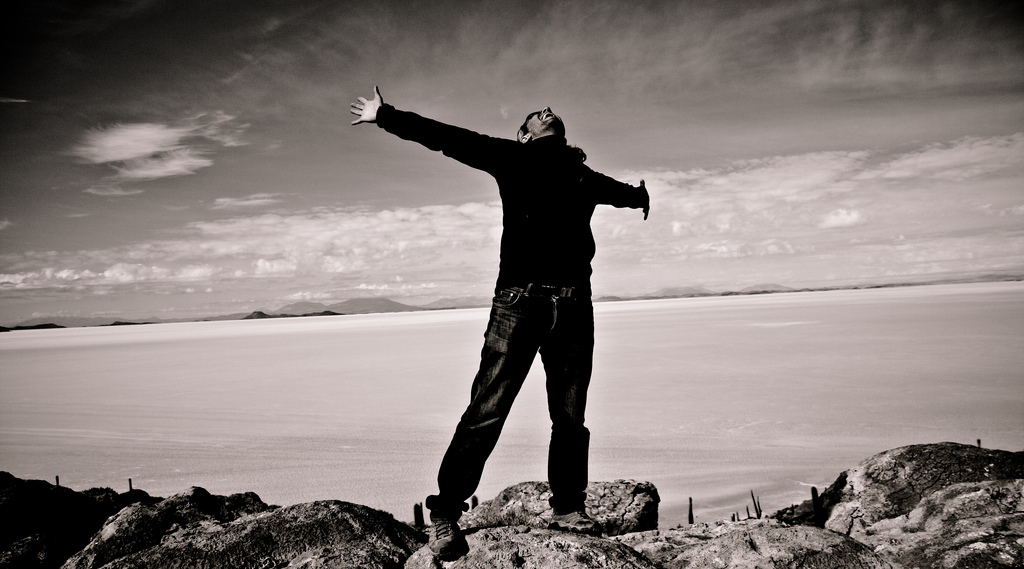 This is a kind of true confessions post. It is a story of persistence in the face of fear and of overcoming failure that is well known among those who are closest to me.  I thought a few people who are ready to throw in the towel might need to hear it. (Selfish confession: it does me good to revisit it now and then.)

Out On The Street

Most people (until now) don’t know that I got into sales because I was unemployable. In my last job the supervisor asked me into the main office for a meeting with the Regional Vice President for a review.

A wiser and more experienced me would have known that I was about to get fired.

I’ll save the reasons for another post as they really are not relevant here. And don’t bother digging. It’s not very interesting, and it’s certainly not something that you can use to extort large sums of dinero from me.

Unemployed, in debt, with little savings, and no references, I walked out into a very uncertain future. Eventually, I answered a blind ad and found myself doing cold call walk-in’s during a searing Texas summer. Cold calls in 100 plus degree heat really are something of an oxymoron.

It would be unfair to say that I wasn’t very good. Unfair, that is, to all the “not very good” salespeople out there. I was truly awful.

If the company I worked for had tracked worst long term performance I would have been a contender.

But, remember, I was basically unemployable. I knew I had to make this work somehow.

The One Thing That Saved Me

One of the things that saved me was a reframe that my manager, Bern, gave me about people who make it in selling. He told me that people quit at predictable times.

Some people never come back for the training. They quit before they start.

Group number two quits between 2 and 6 weeks depending on the length of training. In other words, they get some training and, as soon as they set foot out the door into the real world, they are toast.

The third cut comes at about 6 months. This is the point where a salesperson is starting to get some traction, but typically it is still largely an uphill slog. They are making some money but not a lot. Many people quit here.

At two years you have the final cut. That’s when the salesperson is making OK money but may not have reached the point of momentum. Being afraid that getting to the next level – the “real” bucks –  is going to be even harder, they call it quits and get a “real job.”

After that meeting, I left to go out and pursue my routine of walk-in’s, follow-up’s, and presentations. Bern’s words echoed in my mind all the way as I was driving. Then, I made a decision.

“I’m making the last cut!” I said to myself.

What I Did Next

At that moment I was near a small lake in Grand Prairie, Texas, where I frequently had gone to hide when I didn’t want to face the cold call grind. This time, though, it was different. I stopped the car and reached into the glove box for my camera. I lined up a shot, set the timer, and stepped into the frame. Then I got back to work.

This is the picture I shot.

On the back of the paper copy I wrote the exact date and time I took the photo. That was the day, that was the moment, that everything changed. I was going to make the final cut no matter what.

The next 18 months were no joy ride.

I still didn’t know how to sell. I barely understood our service. I was not really that good with people. I had huge issues about asking for money, leading people to make tough decisions. All of it.

Jeepers, reading that last paragraph makes me shudder even now.

This is a shot of me and Bob Kotz, the vice president of my company, celebrating the national salesperson of the year: Mike Stammer.

And I’ll tell you a little secret. Maybe it’s a big one. The guy in that picture was still struggling with asking for money, getting people to make tough decisions, and I still was far from the top person with technical knowledge in the company. Even today I find myself having to work on the guy who would rather not deal with the fear and struggle involved in reaching a big goal.

Why It Made The Difference

What happened back at the duck pond, even though I hardly understood it at the time, was that when I made that commitment – do or die – and I was ready for whatever that brought…

…at that moment, the Universe kicked in.

You see, the Universe gets in line behind someone who “don’t have no quit in ’em” as we say in west Texas. It just does.

If you are getting ready to quit, before you do, just promise to stay until the final cut.

It’s so worth it.

Besides, I believe in you.

That’s all I can cover on this topic today. Watch for more posts on how to deal with enormous frustrations as well as the specifics of facing your own issues around money and leading people to tough decisions. Thanks for reading.

Michael Stammer is a  sales |life | performance coach available for individual and group coaching and speaking to organizations. For more visit www.coachmichael.com